Telset.id – Samsung has launched Galaxy M21 in Indonesia as smartphone with exceptional battery power. Not only that, the successor of the Galaxy M20 brings a much improved specification, especially in the aspect of the camera and performance. And this time, we have a Samsung Galaxy M21 review unit to be tested.

Similar to the configuration of the Galaxy M30s camera, the Galaxy M21 now comes with a triple sensor camera on the back, plus an 8MP ultrawide camera and a 5MP depth sensor. And most of all the performance capabilities are also enhanced by chipset Samsung's middle class, Exynos 9611.

Of course we are all already curious, how the overall capabilities of the Galaxy M21. Check out the complete review of the Samsung Galaxy M21 below!

Seeing the design offered by Samsung for the Galaxy M21 product, it does not seem to bring much change compared to the previous generation, the Galaxy M20.

This smartphone still uses polycarbonate material for the body of the device, and also a plastic frame. It still looks simple, according to the intended price class. 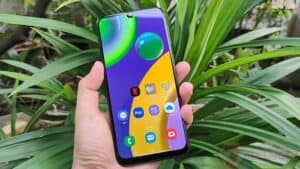 But the Galaxy M21 feels more sturdy, especially since the front of the screen is coated with a Gorilla Glass 3 screen protector. This protection will certainly help prevent scratches on the cross-section of the screen. 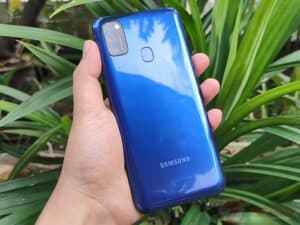 For the unit review The Samsung Galaxy M21 that we tested has a Blue color, in addition to the two other colors available, Black and Green.

Its size is also slightly increased from the previous generation which uses a 6.3 inch screen. The notch or notch on the screen changes slightly, where before, the notch was shaped “V” and now comes in the shape of Infinity U. 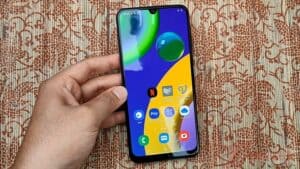 But the Galaxy M21 looks to have a thinner bezel and ratio Screen to Body-it increases, so the form factor isn't much different. The promised brightness reaches 420 nits, and it is proven that the screen of this device looks very bright even in light conditions.

As for the fingerprint scanner, the Galaxy M21 has not used sensors embedded in the screen, and still carries the sensor fingerprint on the outside body of the device. That is precisely in the rear section. Fixed fingerprint sensor with oval shape.

For buttons and the slot, Samsung Galaxy M21 is still with a standard placement. On the right side there is the power button and volume up / down. While on the left side looks SIM Card slot. Galaxy M21 prepares three trays, namely two slots for SIM cards with nano type, and one MicroSD slot.

While on the bottom side, there is a 3.5mm jack hole, USB 2.0 Type C port, microphone and speaker grill. While on the upper side an additional microphone is available. 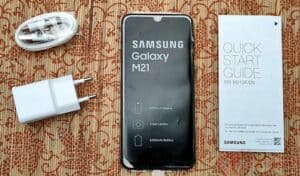 In the sales package, the Galaxy M21 only has a simple set of manuals and warranty cards, a charger adapter and a USB Type C cable. the output the maximum is 15W.